Home europe Latest EU data shows that in the Netherlands 14% of employees work... 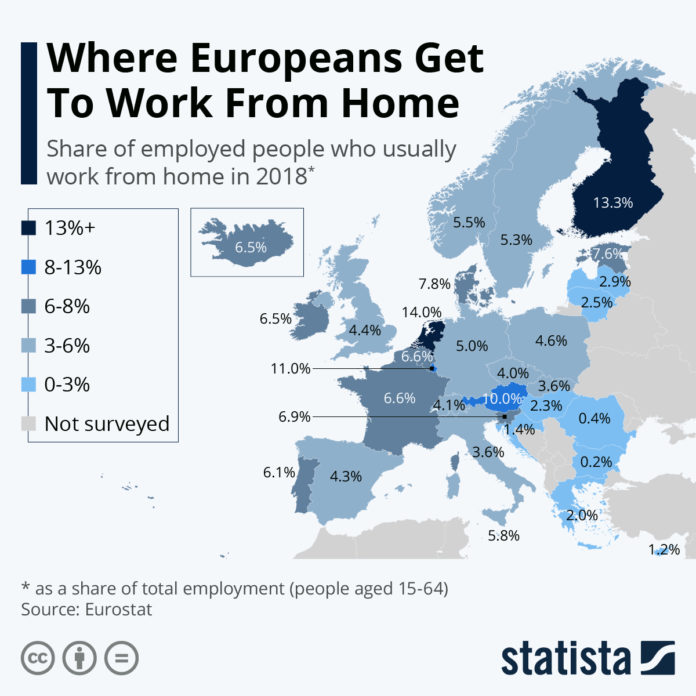 In the latest press relase by Eurostat (statistical office of the European Union) interesting new data shows the share of Europeans who regularly work from the comfort of home office. In 2018. 5.2% of employees aged between 15 and 64 regularly worked from home. The percentage is an average number for all the EU countries . The average share has remained relatively constant at about 5% over the past decade.

Telecommuters in some parts of the Eastern Europe are almost non-existent. The situation in Bulgaria and Romania is completely different compared to Finland. Romania is at 0.4% and Bulgaria at 0.3%.

On the other side of the Atlantic Ocean, in the U.S., according to Fundera 3.7 million employees (making up 2.8% of the entire U.S. workforce) work from home for at least half the time. Only 7% of all employers in the United States offer work from home flexibility and these are usually larger companies at 12% compared to small companies where only 5% offer the same flexibility.

In both USA and EU a slightly higher share of women usually work from home.

The infographic from Eurostats shows the breakdown across the EU (27 countries + GB, Iceland, Norway and Swiss).