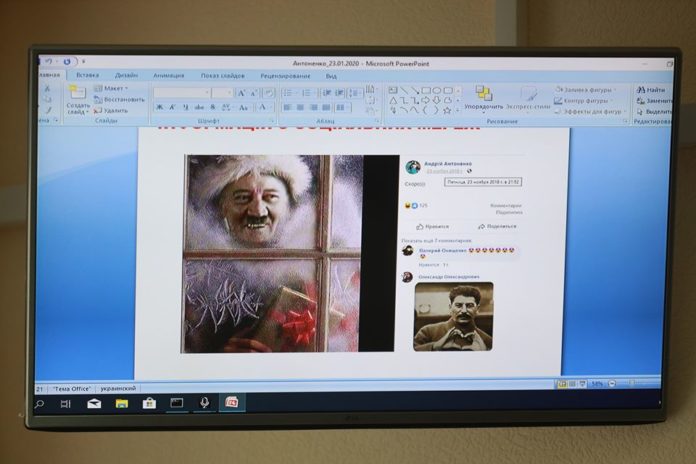 Who killed journalist Pavel Sheremet in Kyiv, Ukraine in 2016? One suspect, Andriy Antonenko, was singled out for praise by then-President Petro Poroshenko in 2017.

Police said some of Antonenko’s social media posts helped them identify him as one of the shadowy figures seen in surveillance-video footage approaching the parked car in which Sheremet would be killed the following day.

At a court hearing in Kyiv on February 5th in the case of the murder of journalist Pavel Sheremet, the prosecutor showed a set of memes with Adolf Hitler, reports Ukrainian Pravda .

The images, according to the prosecutor, were supposed to confirm the ultra-nationalist views of one of the suspects in this case – the thrash metal musician and member of the Special Operations Forces, Andriy Antonenko .

In one of the memes, leader of the Nazi Party is dressed as a Santa Claus while knocking on a frosty window, the other shows Santa Claus in a black coat, with a Nazi armband and a swastika on a red bag. The memes were published on Antonenko’s Facebook page. Similarly, the prosecutor tried to prove adherence to ultra-nationalism by other suspects in the case – military doctors Yulia Kuzmenko and Yana Dugar.

The audience had laugh attacks, “the hall roared like a herd of horses” Stanislav Kozlyuk, a journalist for the Tizdhen newspaper reports.

Following the meeting, judge extended Antonenko’s arrest by two months, Dugar was left under house arrest for the night – from 20:00 to 07:00 she needs to be in the military unit, writes Tizdhen.

Five suspects in the murder case of Sheremet – Antonenko, Kuzmenko, Dugar, as well as spouses Vladislav and Inna Grishchenko – were detained in December last year. According to investigators, Antonenko is the organizer of the crime, Kuzmenko planted a bomb under the journalist’s car, and Dugar photographed outdoor surveillance cameras. President of Ukraine Vladimir Zelensky personally ordered the security forces to find out who is the person that ordered the killing.

Gilead Sciences, Inc. (GILD) explodes on good news. What is next?