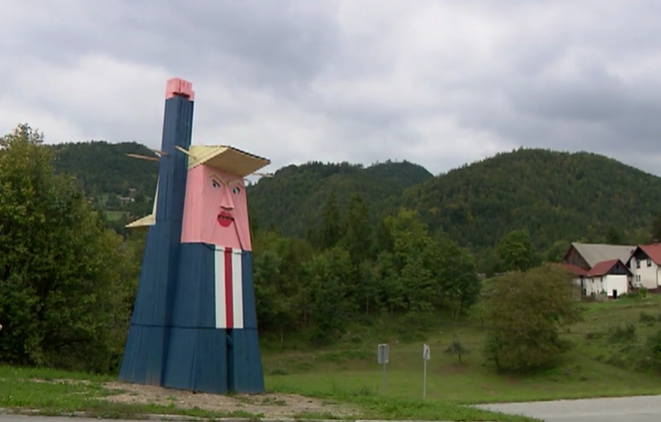 Trump statue, that was erected last year, in Melania’s home country Slovenia was burned down, according to local media. It was known as Statue of Liberty.

Slovenian authorities say a wooden statue of US President Donald Trump was burned in Slovenia, the birthplace of his wife, Melania.

“Like all populists, the statue has two faces,” its creator, Tomaz Schlegl, said when he unveiled the statue last August. “One is humane and nice, the other is that of a vampire.”

Although the structure has become a popular tourist attraction, some residents of the Village near Kamnik were dissatisfied and announced that it would be burned down for Halloween, and was moved to nearby Moravce.

The mayor of the town, Milan Balazic, says the burning down the statue is “is symbol of intolerance toward artistic projects in our society.” and added- “‘ An unknown arsonist destroyed our sculpture, which we thought would bring many tourists to our municipality”

He also said that two days ago there was an unsuccessful attempt at arson, but at the time the unknowns failed, according to the mayor, the arsonists at that time “used too little oil”. Unfortunately, the second attempt was successful, he added.

A new sculpture, probably made of stone, will now be standing at the site, according to the mayor, it will be called the ‘Statue of Tolerance’.