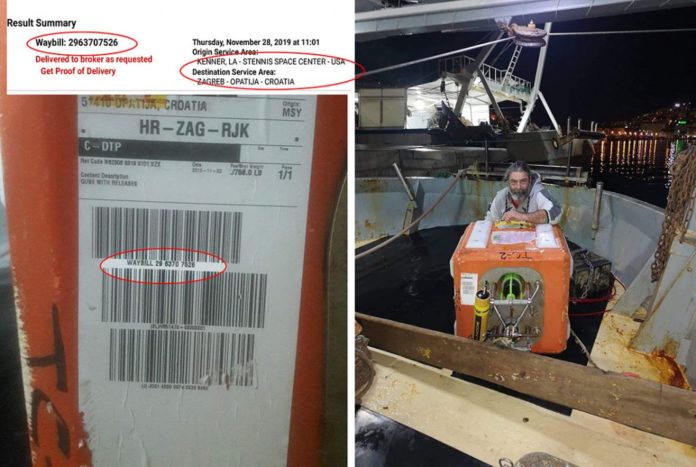 According to local news portal Croatian fisherman Darko Kunac Bigava caught a mysterious device weighing around 300 pounds while fishing near the island of Mljet. The Americans asked the fisherman to return the device to them, and the fisherman demanded compensation for the damaged fishing net.

Croatian fisherman Darko Kunac Bigava from Podgora was fishing as usual between the islands of Mljet and Sveti Andrija, when he suddenly caught a mysterious orange device in his fishing net.

His story attracted the news portal Morski.hr, which decided to investigate about the device. The portal contacted the US Embassy in Croatia, but they did not want to comment on the matter, as it is a “confidential matter”. Later, the fisherman was contacted by a U.S. ship crew and asked to return the device to them.

However, the Croatian fisherman replied that he would not return the device to them until he is compensated for the damage caused to the fishing net due to the weight of the device. The damage is estimated at 20,000 kuna or around $3,000.

Morski.hr furthermore reports that the fisherman met with the crew of a US ship. ” At first, they demanded the immediate return of their device, and I told them I was a Croatian citizen and not a pirate from Somalia, so they would not talk to me. Then they told me I was a tough negotiator, so we handed over device the fair way , “said fisherman Darko. He signed a contract with the Americans, then they gave him the money, and he returned the device to them. Darko also wanted to take a photo with the Americans, but they refused.

According to the DHL waybill number it looks like the object was sent from Stennis Space Center but who is on the receiving side?

According to the one of the readers of Morski.hr, device must have been lost by US Navy ship USNS Bruce Heezen that visited the area where this device was found. Looking at the data from Marine Traffic, USNS Bruce Heezen had a very strange route in this area at the past few days. Lets take a look at this screenshot.

We contacted Stennis Space Center but are still waiting for the response. If you know what is the object in question, feel free to contact us via tips@alugy.com

Why is EXPE the best OTA you can invest in: Here are the numbers