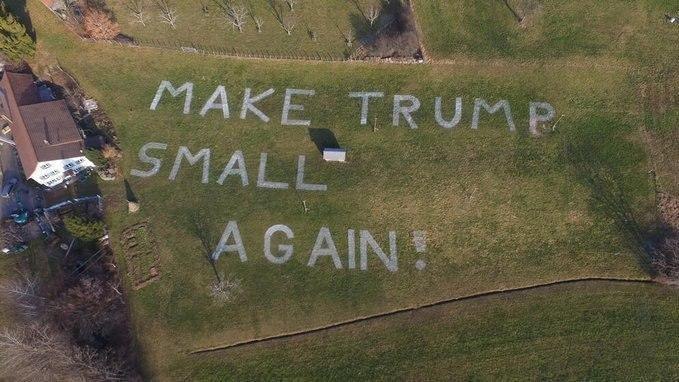 Hebi Dobler, 52, who runs a sawmill in Wernetshausen painted a large banner with a message to Donald Trump that the US president could see from his helicopter en route to Davos. The message reads- Make Trump Small Again.

Hebi Dobler and his wife are not particularly fond of US President Donald Trump. The machinations, the shamelessness – “that should be over nowadays,” says Dobler, who runs the Dobler sawmill.

And the 52-year-old doesn’t have much good to say about World Economic Forum either. «There are certainly a lot of people with good ideas there. But in the end it doesn’t work. A huge effort, a lot of pomp, but little effect. »

After finding out that Trump’s helicopter fleet will fly to the World Economic Forum over his meadow to the Davos gathering, Hebi Dobler decided to purchase as much field paint as he could. He used classic sports field paint produced locally. “It is not harmful to the environment, so I thought it was fine.”

Then he spent the next few hours painting a simple but effective message in eight-meter letters: “Make Trump Small Again,”. «I have the feeling that Switzerland is small and must now kneel in front of the president. I do not think so.”- he said in the interview for Zueriost.

At the first attempt, when the helicopter fleet flew over Dobler’s meadow on Tuesday morning, fog hovered over it and obscured the lettering. “Force majeure,” he says.

But not everything is lost yet. “The return flight route leads even closer to the Bachtel.” Now he hopes that at least the return flight will take place during a fog-free period.

“But the message is not just addressed to Trump personally, but to everyone who flies over it.” For him, his action made sense anyway. “Sometimes it’s just necessary to express your opinion.”

Is Applied Materials (AMAT) ready for 12 months of shutdown? Here are the current...