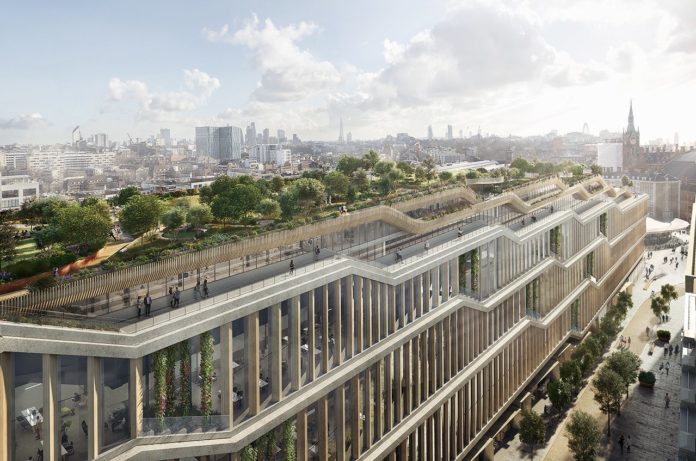 Back in 2017, Google announced plans for its new headquarters in London and the works are slowly but surely coming to an end.  The building, with its 1,082 feet-long base was christened the “Google landscraper” as it is going to be longer than the Shard — the tallest skyscraper in the UK.

It includes numerous “green” features and was designed by BIG – Bjarke Ingels Group and Heatherwick Studio. Companies Hess Timber and Josef Gartner GmbH have collaborated to produce what will be the world’s largest wooden façade at 23,300m².

The campus, which will also incorporate the current building at 6 Pancras Square and a supplementary third building, will include the following: cafe / restaurant spaces, multi-function games areas, treatment / massage rooms, 25m swimming pool as well as an event center and staff training facilities. Positioned on the north side of King’s Cross and St. Pancras Stations, the interior is designed to enhance the working experience of personnel.

The design will see the custom-made vertical timber panels interspaced with energy efficient solar-coated glazing across 7 levels with three horizontal concrete slabs. The design is such that the spaces are flexible for variable use and it is hoped to be an inspirational workspace.

Active and passive design strategies will be included to make the building as energy-efficient as possible and it will also sport a large vegetated roof. About 40% of the rooftop space (3800 m2) will be transformed into a rooftop garden. This will include a lawn, a wildflower plantation as well as a number of beehives. It is hoped to attract wildlife and promote biodiversity while simultaneously providing staff with a green recreational area.

The building’s completion is projected for 2022.