Home asia Disgusting, man continues to stand in his own puddle of poop after... 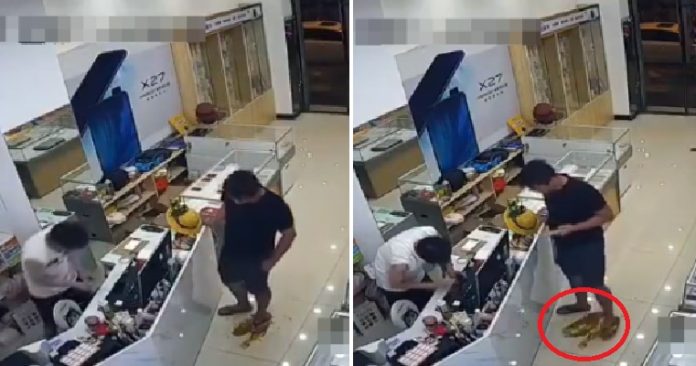 Recently a video went viral on Facebook of a man in a shop standing in a puddle of poop. The worst part of the whole situation is that it seems to be his own poop!

In the 15-second video a man is seen standing in a cell phone shop, apparently in the middle of a transaction. As we all do, from time to time, he needed to pass some gas and thought he would let a small one rip.

Instead, some brown liquid squirts down his legs to form a puddle around his feet. He looks down at the mess, but instead of being embarrassed and moving away, he simply keeps standing there!

He then calmly takes his phone out of his pocket and fiddles with it, while dragging his toes through the puddle of poop. In the meantime, the shop assistant is busy working on the other side and sees nothing.

There has been a lot of comment on the video with people speculating that for the poop to flow down his leg so smoothly, he probably wasn’t wearing any underwear. Reactions of people who viewed the video ranged between totally grossed out to amused by his nonchalance.

Rolex Closes Three Factories as the Coronavirus Spreads in Switzerland

ROKU seems immune to coronavirus. This is why the stock surged 15%