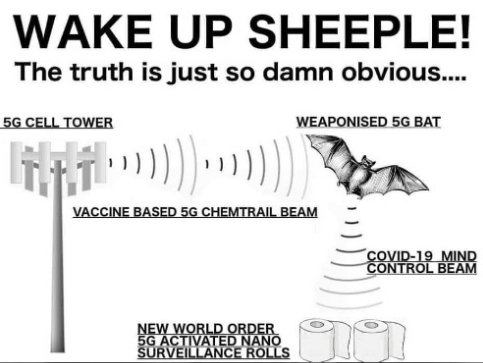 On April 2nd, a viral-video-of-the-day featuring 2 telecom workers and a woman behind a camera we can hear a woman asking those 2 workers if they are laying down 5G. After asking one of the men if he has children or parents, when she’s told he has his mom, she responds: “Well when they turn that switch on, bye-bye mama. Are they paying you enough to kill her?”

The switch she is talking about is 5G. There is a conspiracy theory spreading like a bush fire that claims 5G is connected to the spread of the coronavirus (Covid-19). But it is not just the conspiracy theory that is burning. Lately, in some parts of the UK, mobile phone towers have been vandalized because of these claims.

People around the world are talking about 5G causing coronavirus spread so governments can then vaccinate everyone and install chips. According to conspiracy theorists, the man behind this plan is – Bill Gates.

Conspiracy theories falsely linking Gates to the coronavirus’ origins in some way or another were mentioned 1.2 million times on television or social media from February to April,

But yesterday Twitter decided to side with Bill Gates and officials banning all 5G conspiracy related material from its platform. “We have broadened our guidance on unverified claims that incite people to engage in harmful activity, could lead to the destruction or damage of critical 5G infrastructure, or could lead to widespread panic, social unrest, or large-scale disorder.”- it is noted via Twitter Safety account adding that their “automated systems have challenged more than 3.4 million accounts targeting manipulative discussions around COVID-19.”

The first and most vocal responds to that tweet came from conspiracy theorists. The battle continues I guess.

Here is why SNAP have nothing to offer and why will never be Facebook...

Why does Tesla’s gigafactory in Germany needs 100K gallons of water per hour?