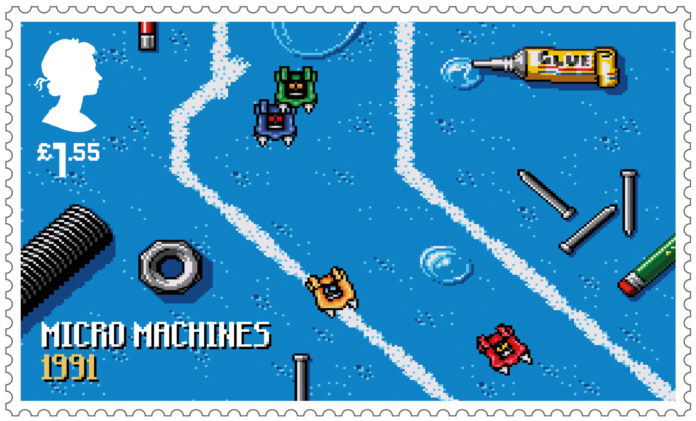 British postal service, Royal Mail, have released a set of stamps to pay homage to British video games which paved the way for the massive gaming industry, with an estimated value of a billion pounds.

The set comprises 12 stamps which show how video games have evolved since the early 1980s. There was a long list of games from which a few had to be selected. Royal Mail collaborated with the Association for UK Interactive Entertainment (Ukie) and independent video game experts to collate the final list.

The games featured include space shooter game Elite, the first civilisation-building game Populous, FIFA predecessor Sensible Soccer, racing games Micro Machines and Wipeout, Dizzy’s adventuring egg, Worms and the puzzle-platformer Lemmings. Each of these games has a dedicated stamp while Tomb Raider has a set of four stamps showing the development of Lara Croft designs since the beginning in 1996 through to the latest version in 2013.

Bath-based Supple Studio and gaming book publisher Bitmap did the actual designing of the stamps. Bitmap Books’ creative director, Sam Dyer said “The aim was to capture an iconic screenshot that sums up the game and will bring back memories for people who played them many years ago.”

Supple Studio’s Jamie Ellul added: “Stamp design is trickier than you might think. Quite often what looks good zoomed in on screen, looks wrong when printed out at stamp size.”

For each game, they needed to take hundreds of screen shots and use trial and error to find one that would work. After the correct shot was found, the name of each game was added along with the Queen’s head and the value of the stamp.

Working with someone who was able to extract the exact typeface from each game’s files, they were able to show not just the gampeplay, but also how the games evolved as technology through the years became more advanced.

Dyer believes that these games were “true examples of technical innovation.” And that the stamp collection finally gives them the recognition they deserve.

You can pre-order them here. They will be released on the 21st January.

Business Insider lures scared people with a tweet of a “leaked document that estimates...