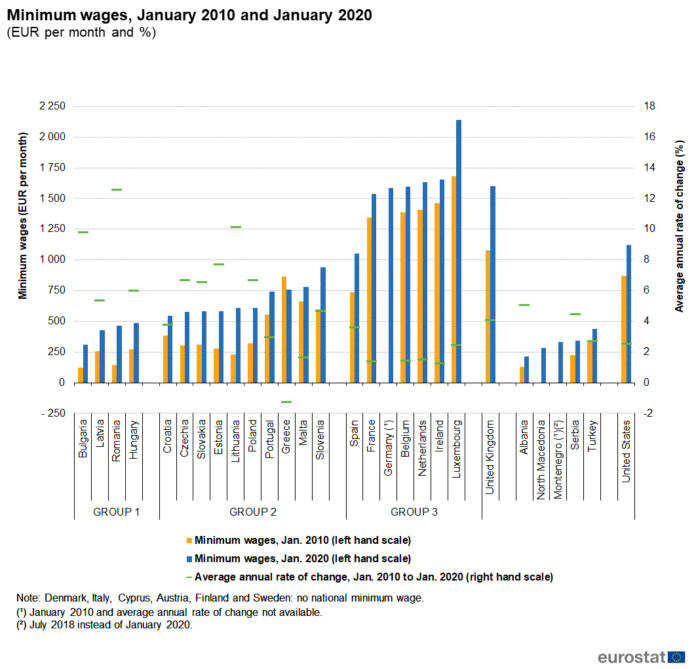 Based on the level of their national gross monthly minimum wages expressed in euro terms, EU Member States covered by this data collection may be classified into three different groups; non-member countries are shown in Figure 1 as a separate group.

The data is divided in 3 Groups, where Group 1 is for countries where national minimum wages are lower than EUR 500/month . The EU Member States with the lowest minimum pay in this group are: Bulgaria, Latvia, Romania and Hungary; their national minimum wages ranged from EUR 312 in Bulgaria to EUR 487 in Hungary. All 4 countries in this group joined EU 15 years ago, on 1 May 2004 and they are all post-communist countries.

These countries are followed by countries in Group 2, where national minimum wages were at least EUR 500 but lower than EUR 1 000 per month in January 2020. The EU Member States in this group are as follows: Croatia, Czechia, Slovakia, Estonia, Lithuania, Poland, Portugal, Greece, Malta and Slovenia; their national minimum wages ranged from EUR 546 in Croatia to EUR 941 in Slovenia.

Minimum national wages in Group 3, were at least EUR 1 000 per month in January 2020. The EU Member States in this group included: Spain, France, Germany, Belgium, the Netherlands, Ireland and Luxembourg; their national minimum wages spanned from EUR 1,050 in Spain to EUR 2,142 in Luxembourg.

President of EC, Ursula von der Leyen, promised that she would propose a legal way for fair minimum wage in the first 100 days of her mandate.

A worker in China was killed on the spot due to the explosion caused...