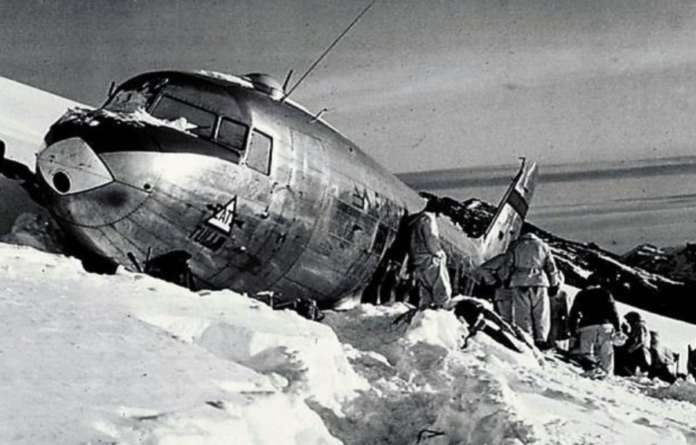 In November 1946 a U.S. military plane,the C-53 Skytrooper with serial 42-68846, crashed on the Gauli Glacier in the Bernese Alps in the canton of Bern in Switzerland. A research team has now calculated that most of the wreck will appear in the coming years.

Thanks to a spectacular rescue operation, the pilot and the eleven crew members survived. But the hidden plane has been missing since the crash, only a few pieces of debris reappeared a few years ago.

A team of researchers from the University of Zurich, together with the Spiez Laboratory and the Swiss Army, found out that the glacier will soon release even more parts of the wreck using radioactive material in ice samples.

The nuclear weapons tests in the USA and Russia in the 1950s and 1960s left radioactive traces in the glacial ice. These residues allow scientists to date the ice and reconstruct the flow of the glacier.

Using a computer model, the ETH researchers calculated where the soldiers had to drill into the glacier to extract ice from the Cold War era. While the researchers did not dab the right spots with their predictions for the first drilling campaign, they succeeded in the second campaign in summer 2019, according to ETH Zurich.

The soldiers took almost half a ton of ice from the glacier at a total of 200 points, which was then examined for radioactive elements. “In the drill cores of the second campaign, the two main peaks of pollution with radioactive substances from 1957 and 1962 can be clearly seen before the contamination breaks off abruptly after 1963,” said Guillaume Jouve from ETH and the University of Zurich.

The data allowed the researchers to refine their flow model for the Gauli Glacier. Accordingly, the ice masses are moving downhill faster than previously thought, as reported in the specialist magazine “The Cryosphere”.

And the final data is telling us that most of the Dakota wreck near the previous finds will probably reappear sooner than expected.

The bad news-the elements and the crunching power of the glacier pulverized the airframe and wings to small pieces.

Why does Tesla’s gigafactory in Germany needs 100K gallons of water per hour?