Home europe Here is why Deutsche Post AG (ETR: DPW) stock is down 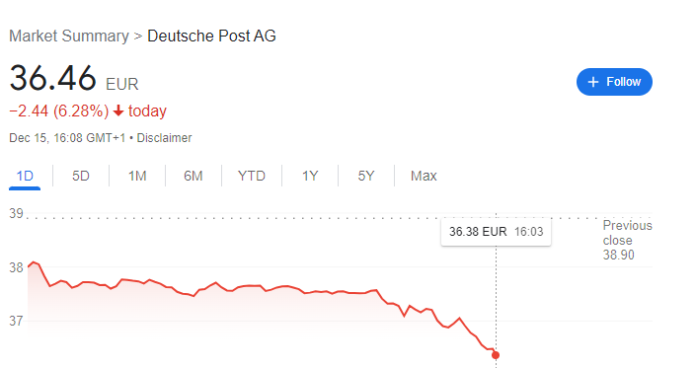 The US bank JPMorgan has given the shares of Deutsche Post “Negative Catalyst Watch” status and thus expects negative news from the logistics group in the short term. However, the target price was raised from EUR 41.50 to EUR 46.40 and the rating was left at “neutral”. Analyst Samuel Bland expects the group to lower its medium-term targets when presenting the annual figures for 2022. For the logistics sector as a whole, he expects significantly falling freight rates in the coming year – starting with maritime shipping and expanding to aviation. To the extent that consumer spending slows less than expected, freight volumes and rates could recover, he wrote in an industry outlook released Thursday.

There is more positive news about Deutsche Post. The company is said to be interested in taking over the rail logistics subsidiary Schenker. The “Manager Magazin” (MM) reports on Thursday, citing insiders. In association with Schenker, the forwarding division of the post office would be the clear market leader worldwide. The fact that competitors such as Maersk or the Danish freight forwarder DSV could incorporate Schenker also plays a role in the considerations of the post office.

The catch-up race for Deutsche Post shares has recently stalled. The stock is currently struggling with the important support in the form of the 200-day moving average. This should definitely be defended if the chart technical picture is not to deteriorate any further. Recapturing the EUR 40 mark would be an important positive signal.

To sell or to buy?

The Myths of Time