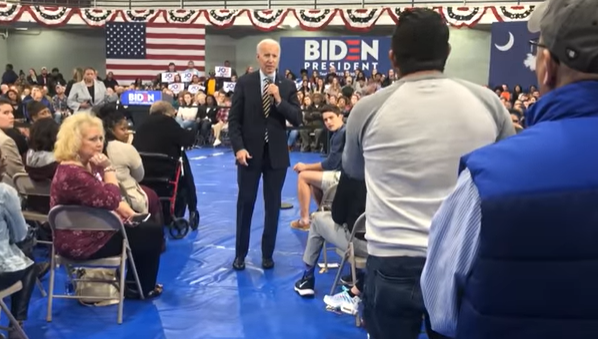 Democratic presidential candidate and former VP Joe Biden is having a hard time on the campaign trail. Thursday at a town hall in Greenwood, South Carolina, Biden drew condemnation after he was asked if he would halt deportation of illegal immigrants via executive order and he responded that he would not. In fact, Biden focused instead on his plan to first deport convicted criminals.

The activist asking Biden a question, identified as Silvia, was speaking to him via her translator Carlos Rojas. Even though a member of Biden’s team forcefully removed the microphone from Rojas after he asked about deportation, Rojas continued questioning Biden as the two spoke onstage. Rojas spoke of his disappointment in campaigning for President Barack Obama in 2008 only to have the Obama administration deport over three million individuals. Rojas spoke of Obama’s two terms and how “there were three million people that were deported and separated from their families.”

Rojas said he had no plan to do so and began a chant of “not one more!” with a response call of “deportation.” Those chanting were escorted out of the town hall event, with the 800-strong crowd applauding.

Speaking afterwards to the media, Rojas said he was initially in disbelief that Biden had told him to vote for Trump and presented the choice in the election as binary between a corporate Democrat or Trump.

“To me, that message just speaks to a candidate out of touch with the needs of the immigrant community,” Rojas told media.

It wasn’t Biden’s only gaffe of the evening. He later rebuked a climate justice activist from Friends of the Earth Action who asked him to turn down corporate donations and prioritize environmental protection and fighting climate change.

“I do not take money from corporations,” Biden said, adding “You listen to Bernie too much, man. It’s not true.”

Further activists were shown the door with the crowd applauding. It is false that Biden does not accept corporate donations. His presidential run has large amounts of lobbyist-linked donations and is partly fueled by a super PAC launched last month with no contribution limits.

Analysts say HelloFresh stocks are a buy. What you need to know