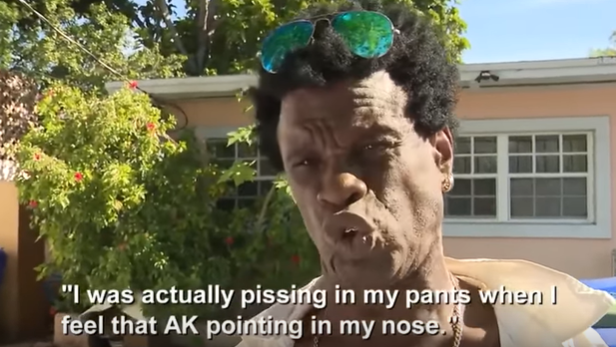 Seems as if the quote “When the going gets tough, the tough get going” was coined by a 60-year-old Donovan Stewart. Jamaica born and Florida raised Donovan didnt want to go down just because someone pointed an AK-47 to his nose.

He remembered he have a Glock by his side and he acted fast.

It was an early Morning in Miami when Donovan, his wife and their 11-year-old son were awaken by a local madman that terrorized the neighbourhood on several occasions.

“The guy I killed last night, he put an AK-47 to my damn face,” Steward said to Local10 Miami.

Donovan said the wannabe thief opened the door to the van he was sleeping in and pointed the AK-47 at him. Split second decision probably saved his life.

“I am from Kingston town in Jamaica, and I am not going to go out like a punk, so I emptied my Glock in his chest. This man tried to get in my van while I was sleeping, and he was surprised to see what I did.”-Steward said.

“You know I have a security license, I have a G license, and I have a state firearms license and a concealed weapons permit and I have a gun and I am a member of the NRA,” he said. “My family is innocent, and just don’t put an AK-47 in my face. I will not allow that to happen.”

“You want to come looking for trouble?” Stewart said. “Come to me. Come to me. I wouldn’t do anything like this to anybody, and they picked the wrong person in this case.”

WhatsApp is back after it crashed worldwide, Europe worst affected region.

This is why Royal Dutch Shell stock price is down. What is coming next?