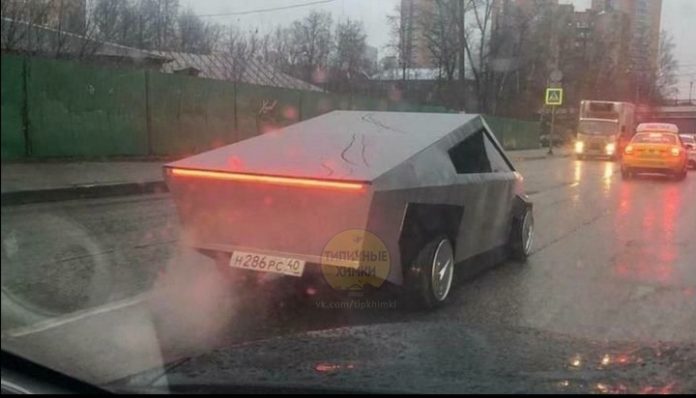 People behind the Russian YouTube channel Pushka Garage (Gun Garage) decided to create a knockoff of Elon Musk’s Cybertruck and to take it for a spin around the city. City is called Khimki (Moscow region). Three days ago video first appeared on Instagram and everything exploded from there. Not literally though, the car is still operational. Lets take a look at that video first and after that we will continue with the interview with a guy behind the project.

On December 18, media reported that they saw a home-made car resembling a Tesla Cybertuck on Russian roads. A car with a characteristic futuristic design. No one knew who was behind the project, but new video appeared a day ago and we are giving you the details, the guys behind the project, the price and how long it took them to finish the project. Translation and details are under the following video.

Alexander Trubnikov (Constructor): “We were interested to challenge ourselves and create in the shortest time frame with the most limited budget something similar to Tesla Cybertruck.”

So they created a Russian Tesla in 8 days.

Overall costs of the project reached 80 thousand rubles (around $1300)

Alexander Trubnikov (Constructor): “From the construction perspective we had to cut the roof of the car. That was the only requirement to the car that we picked for this project and that is why we bought the “nineth” (a model of a car, popular in Russia).

Alexander Trubnikov (Constructor): “The section with the engine is now within the car’s interior. There are certain issues now. First of all, the amount of carbon monoxide within the vehicle has significantly risen.”

There are a lot of plans for the vehicle’s upgrade. The constructors are going to install the electric motor instead of an internal combustion engine and the rear-wheel drive.

Alexander Trubnikov (Constructor): “This is not the final version, this project will definitely live on.”

And today, on December 21st they published a pretty longish video on their YT channel where they talk about the project and how it all started.

In 2011 Trump said Obama “will start a war with Iran because this is...

Roku (ROKU) Outpaces Stock Market Gains: What You Should Know