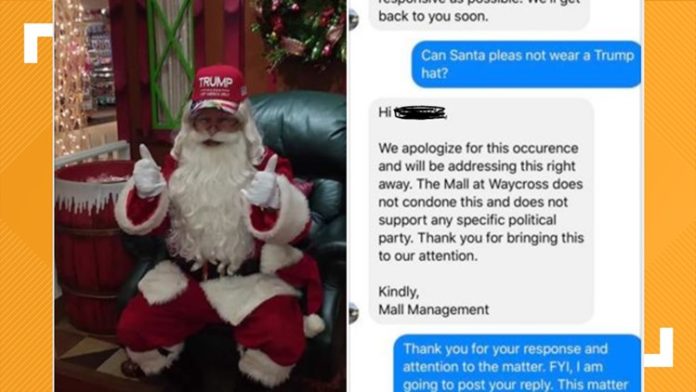 “It’s safe to say he will not be wearing this hat around here.” — James White, Waycross Mall manager

WAYCROSS, Ga. — Santa Claus is looking for a new job after a mall in southeast Georgia pulled him for posting a picture of him wearing a Trump 2020 via social media.

Frank Skinner has played Santa Claus every Christmas for nearly 50 years, including the past 14 years at The Mall at Waycross Shopping Center in Waycross, Georgia. But this was not enough to save his Santa gig.

Skinner said the mall was already closing and no children were around him last week when he decided to switch hats and pose wearing the Trump hat for fun.

Mall management was quick to respond when a customer shared the photo with them.

“We apologize for this occurrence and will be addressing this right away. The Mall at Waycross does not support any specific political party. Thank you for bringing this to our attention. Kindly, Mall Management”

Ryanair CEO:support for Lufthansa and Air France is illegal under EU laws