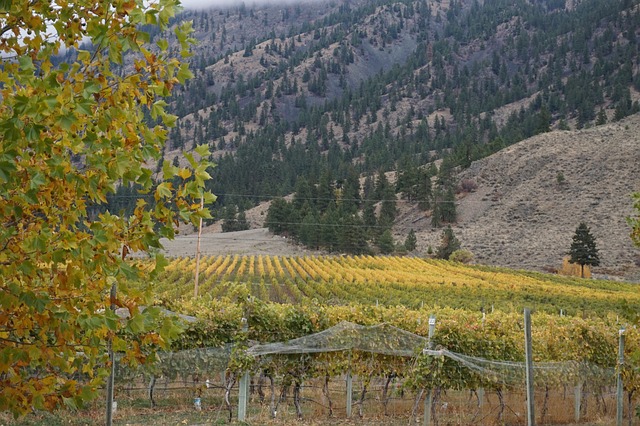 BRITISH COLUMBIA is a relative newcomer to the world’s quality wine trade having been around only for the last 40 or so years. Yet, because of the intense determination and talent of a few of B.C.’s pioneer winemasters, the wines have begun to develop into a special breed quite unlike anything else in the world. Currently B.C. has about 40 wineries, each offering wines that have become internationally recognized and respected.

British Columbia currently has 3 distinct wine regions. The Okanagan Valley region in British Columbia’s south central interior is the largest both in size and in the number of active wineries. The Okanagan Lake that fills most of the valley floor helps to control the blistering afternoon heat that sometimes develops in this semi-arid desert landscape. The northern half of the valley is noticeably cooler than the southern half and grape growers are finding that the grapes grown in the hot south may not necessarily work as well in the north as other varieties better suited to its cooler climate. The variety of microclimates and soil types in this valley allows neighbouring vineyards to produce completely different wines, though most agree that all of them are excellent.

The second largest wine region in British Columbia is southern Vancouver Island. A large handful of small wineries have started up in this milder, yet well-suited grape growing climate. These wineries are now producing fruity, crisp wines which are highly praised by wine writers .
Last but not least is the Fraser Valley region. The weather is mild and relatively wet here. Only two wineries are in this area to our knowledge and of these two only one grows their own grapes in the area. Despite the less-than-ideal climatic conditions, both are accomplished, well-known wineries producing sought-after wines.

The grapes grown in British Columbia are mostly French Vinifera varieties like Chardonnay and Pinot Noir or German varieties such as Riesling and Gewurztraminer that landed here within the last 20 years or so. Government sponsored experimental vineyard plots were set up to determine which varieties of the Vinifera breed of grapes (long known to be the better grape breed for winemaking) would ripen properly and survive B.C.’s consistently frosty winters. The knowledge gained from these experiments gave winemakers the headstart they needed to produce quality wines without the years of trial and devastating error they would have otherwise suffered through. The myriad of Vinifera varietals producing wines today in B.C. is staggering.

Crisp fruity clean white wines and luscious dessert wines are British Columbia trademark products. Some are made in the friendly traditional German off-dry (only slightly sweet) style while some are produced in the fashion of the great french dry wines. Same goes for the dessert wines. Some are French (Sauternes) style Botrytis affected “late harvest” sweet wines, and some are german style Icewines – grapes picked and crushed while still frozen – and also very sweet. If you have yet to try one of these B.C. dessert wines, you’re in for a pleasant surprise. They are, to coin a bad cliché, “to die for”.
Red wines have in the past not been a strength in B.C. though there have indeed been some great reds that have come out of the valley; what remains to be seen is whether they will eventually rival the whites in recognition and volume.

Further work on matching grapes to microclimate to extract the ‘terroir’ is necessary and already underway. Some growers in the south Okanagan are now of the feeling that their hot microclimate and long growing season may be better suited to “big bodied reds” than previously believed. Plantings of Cabernet Sauvignon, Cabernet Franc and Merlot (among others) are now scattered throughout this area. Pinot Noir, a sophisticated medium-bodied red wine, has had success in B.C. also. The finicky vines used for this wine seem to feel right at home in all of B.C.’s wine regions.

As the industry turned toward quality wine production in the late ’70s, many aspiring winemakers went abroad, to German winemaking schools like Weinsberg and Geisenheim, or to the University of California, Davis, in the US, for training and brought back with them a variety of winemaking styles that are still evolving and adapting to British Columbia’s growing conditions and grape varieties. There has recently been an influx of winemakers from other winemaking areas that are contributing even more to the complexity and variety of British Columbia’s wines.

British Columbia’s wines are becoming the special treat that the winemaking pioneers once envisioned. A reputation they well deserve.